Following on from the short article on Mr. Buckland in the previous newsletter, I wish to shine a light on another champion plantsman, and a Clivia enthusiast who ‘got away’, Mr. Fred Meyer.

When I was researching information for my presentation and article, Clivia in California (MCG Newsletter 9.2) I saw a photo of a group of plant loving people who met for an informal discussion about Clivia at the Huntington Gardens in 1996.

This gathering was instigated by Kathy Musial, Living Collections and Collections Manager/Curator, Huntington Gardens, where for decades they had various Clivia massed planted in garden beds. Among the group are well known Clivia identities, the late Dave Conway and photographer and plant breeder James Comstock. Also pictured are San Marco Nursery General Manager, Randy Baldwin, Kathy Musial and Huntington Gardens’ garden superintendent, Fred Brandt, a man who loved to grow Clivia from seed. A name that I was unfamiliar with was Fred Meyer (Back row of above picture, 3rd from LHS). While I was on another intense plant researching mission, in that instance, Hippeastrum, in particular H. papilio and cybister types, I again saw the name Meyer, and recalled an association. I was then to learn so much more about this man and his amazing legacy.

Fred Meyers, (born 1953 died 1999), lived a life cut short in years, but not on experiences or achievements. Fred was a passionate plant breeder across many genera. His friend Steve Brigham wrote a tribute to him saying, ‘Alstromeria, Amaryllis and Anigozanthos are but three of the many types of plants Fred grew from obscurity to magnificence, and that is just with the letter “A”!’ Indeed there is a vast list going all the way to Zantedeschia. Kathy Musial wrote, ‘Fred was into so many plant things that I think if you name a group I could think “oh yes, Fred was into those too”.’

It is my interest in Hippeastrum papilio (below) that made me aware of Fred Meyer’s vast contribution to horticulture. 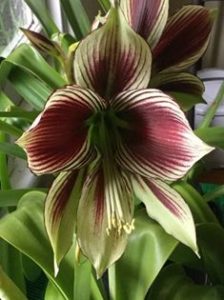 H. papilio was introduced to western botany in 1967, and formally described and published in 1970. Its species name refers to the flower’s resemblance to the insect genus Papilio, swallowtail butterflies. It was considered extinct in the wild until the 1990s when Fred Meyer observed it growing on trees in a small section of untouched habitat in Rio Grande do Sol, southern Brazil. Deforestation for farming has reduced a vast ecosystem to fractured patches of natural forest. Fred used this spectacular evergreen species and crossed it with species cybister (originally from Argentina and Bolivia) and Dutch hybrids with amazing results. As with other bulbs, good drainage is essential, and your choice of media for Clivia would suit hippeastrums. Part (morning) to full day sun positions are best, according to the season. My thanks must go to Randy Baldwin, James Comstock and Kathy Musial for the personal correspondence and information about Fred. May his spirit of adventure to travel and breed plants inspire all of us.